Guiding Light Ministries, International is a non-denominational present-day truth church. All are welcome to come and worship with us. Like the Tribe of Isachar, it is essential that we as believers be developed to hear and know the voice of God as well as discern the times we are living in. Rhema word can be expected along with confirmation in the scriptures.

Our first services were held March 17, 2004 in the home of Michael and Linda Hardy. Starting out with 8 members, the new church plant received much encouragement and blessings from the pastors of City of Refuge Mission, COGIC. The Hardy’s were long-time faithful members at City of Refuge for 21 years. Says Pastor M. Hardy “My assignment to Pastors Thynoise and Mary Hines was “to stay their hands unto the going down of the sun. As long as their hands were stayed, the congregation received strength to prevail over the enemy. During house worship, fervent prayer with strong intercession and impartations accommodated the songs and preaching of God’s word. Operation in the gifts of the Holy Ghost as outlined in 1 Co.12; was demonstrated in many of the services.

As attendance grew, it became necessary to look for a building. After much prayer and fasting, the new church moved into Glynn Plaza (Suite 25) in August 2005. Three years later Suite 27 and 31 were added giving Guiding Light Ministries about 1300 sq.ft. This gave needed space to the growing ministry which included additional restrooms, sound room, office space, kitchen area, storage, classrooms, and expanded worship facility. During the summer of August 2014, Guiding Light Ministries moved to its current location at 4850 Hwy 17N, after purchasing the property formerly known as The Ministry Center. Four years later in August 2018, the entire church mortgage was paid in full. With future plans of building a new worship facility, we are indeed grateful for our faith journey. Ephesians 3:20 says” For God will do exceedingly, abundantly above all we could think or even ask, according to the power which worketh in us.” Great is thy faithfulness…… 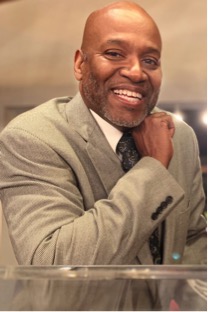 Pastor Michael A. Hardy, Sr. has been married to Linda Marie (Moseley) Hardy since 1979. They have one daughter, Shelanda (Patrick) M. Smith of Savannah, Georgia; a son, Michael A. Hardy, Jr of Brooklyn, N.Y. and, two guardian daughters, Alicia and Ashley Fowler, both of Brunswick, Ga.

He accepted Jesus Christ as his personal Savior at the age of 17 and two years later he received the baptism of the Holy Ghost with evidence of speaking in other tongues as the Spirit of God gave utterance. Pastor Hardy answered the call of God to preach the gospel of Jesus Christ during his junior year at Valdosta State University at the age of 20. During this time, The Spirit of the Lord spoke to him with a mandate to “tell my people that the Holy Ghost is real. I am He who leads and guides my people today. There will be demonstrations and manifestations which are of me saith the Lord.” Pastor Hardy has preached openly on street corners for 14 years on some of the roughest streets in Brunswick, Georgia. He has organized outdoor evangelistic meetings, conferences, traveled as an itinerant minister for revivals and pastoral celebrations. In 1996, God began to use him in the gifts of the Holy Spirit. Many were healed by the power of God, unclean spirits were casted out and the prophetic word of the Lord was being declared in the lives of God’s people.

Pastor Hardy received his ministerial license from Bishop J. D. Husband and later ordained by Bishop Chandler D. Owens, Jurisdictional Bishops of the Churches of God In Christ. He was an associate minister for 21 years under the leadership of Pastor Mary W. Hines and Elder Thynoise Hines, City of Refuge Mission Church of God in Christ, Brunswick, Georgia. Currently Pastor Hardy is the pastor of Guiding Light Ministries International in Brunswick, Georgia along with his wife Linda M. Hardy, who serves as co-pastor. 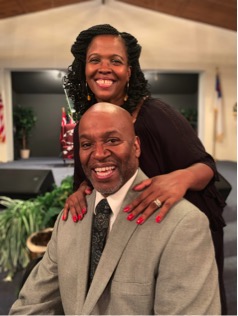 Co-Pastor Linda M. Hardy is the wife of Michael A. Hardy, Sr. They were united in holy matrimony on June 16, 1979. They have one daughter, Shelanda (Patrick) M. Smith of Savannah, Georgia; a son, Michael (Michelle) A. Hardy, Jr of Brooklyn, New York; two guardian daughters, Alicia and Ashley Fowler, both of Brunswick, Georgia. Pastor Linda received her ministerial license from Bishop J. D. Husband and was later ordained as an evangelist in the Churches of God In Christ. She served on the ministerial staff for 21 years under the leadership of Pastor Mary W. Hines and Elder Thynoise Hines, City of Refuge Mission Church of God in Christ, Brunswick, Georgia. Currently Pastor Linda serves as the Co-Pastor of Guiding Light Ministries International in Brunswick, Georgia under the leadership of her husband, Pastor Michael A. Hardy, Sr.

She accepted Jesus Christ as her personal Savoir at the age of 14 and accepted the call of God to preach the gospel of Jesus Christ at the age of 18. During this time, the Spirit of the Lord began to deal with her heart concerning children. She worked for years as a Sunday school teacher, children’s choir directress, VBS directress, Bible study teacher, Women Ministry leader, and as an intercessor on the prayer team. Pastor Linda, as she is called by her church family, has worked with children ministries for over 20 years. She has a heart and passion for women and present serve as the leader for the Women’s Ministry at GLMI. She is an intercessor who have taught many how to enter into the presence of God.

She attended Wayne County High School where she graduated in 1978. Pastor Linda attended Brunswick College where she received an Associate of Science Degree in 1995. She furthered her education by attending Armstrong Atlantic State University and received a Bachelor of Science in Early Childhood Education in 1997. Later in 2005, Pastor Linda graduated from Troy University with a Master’s Degree in Educational Leadership. In 2016, she graduated with an Educational Specialist Degree in Instructional Technology from Valdosta State University. Pastor Linda taught kindergarten for 10 years in the Glynn County School System and worked as an Instructional Coach for 8 years. She presently works as an Assistant Principal at St. Simons Elementary.

To sow, to plant, to equip and release into the body of Christ so that the promises of God’s word be manifested in the lives of the believers here on earth as it is in heaven.